A lot of people have just had a stark reminder of the importance of up-to-date backups.

This month website hosting company 123 Reg suffered a hardware failure on one of its servers. This led to some of its customers’ websites either being lost entirely, partially lost, or restored to an old version dating back to August 2017.

As you can imagine, users were left in a state of anger and confusion. 123 Reg, which calls itself the UK’s “number one website provider”, took a while to let customers know when a normal service would resume and when (if ever) they’d have their websites back online.

This chaotic situation has hit numerous individuals as well as businesses, making them look unprofessional and causing them to lose customer trust and money. It’s presumably up to individual users to ensure that they have backups.

Such little catastrophises are rare, but by no means unheard of.  However their UpdraftPlus users who’d set regular backups were safe: instead of panicking, losing out or having to make do with an old, out-dated version of their website, they would be able to restore everything with a click of a few buttons.

So spread the word: everyone with a website should have insurance – in this online world, plagued as much by incompetence and error as by malicious cybercrime, having backups makes perfect sense.

We just added support for 7 additional WordPress lightbox plugins that you can connect to your MetaSlider slideshows to really show them off!

A lightbox plugin is a plugin which displays images, videos and sliders by filling the screen and dimming out the rest of the web page. 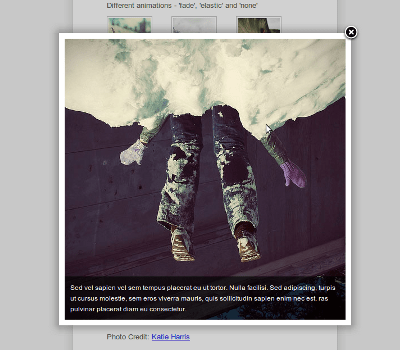 Here’s the list of lightbox plugins we’re compatible with:

Here is the changelog:

Vacancy for Marketing Manager at UpdraftPlus

Love WordPress & marketing?  We could have the perfect role.

There are lots we do already to communicate and marketing the UpdraftPlus brand, but we have a full-time vacancy to manage this responsibility in future.

The role will be adapted to the perfect candidate, but here are some of the things it may involve

If you’re interested, please send your CV to Romelch as soon as possible: [email protected].

The post Vacancy for Marketing Manager at UpdraftPlus appeared first on UpdraftPlus. UpdraftPlus – Backup, restore and migration plugin for WordPress.

UpdraftPlus today announces premium customers will be able to backup WordPress to OneDrive for Business in addition to the standard OneDrive. It’s taken quite a bit more work than expected as the technology integration works differently.

Furthermore, for advanced users with lots of sites, you’ll soon be able to control all your UpdraftPlus installs from the command line with WP-CLI.

We are happy to announce that today we have release EUM version 7.0.1.

The main change in this version is we dropped using Rest API for our settings page and back to using Admin ajax as with our previous versions (Except 7.0.0)

The main reason for the change is that plugins that does a redirect also redirects the call to REST API endpoints and resulting in error loading our settings page.

For example, the qTranslate plugin may redirect your site URL depends on your setting. Meaning that If you choose to add language code to your URL depending on your users’ language selection, it results in redirect REST API calls as well.

Though We have fixed the issue with provided filter by qTranslate, We afraid that the issue has a larger scope than just one plugin. So we decided to switch back to using admin ajax and releasing an update.

Here is the changelog:
* FIX: Enabling Log from Advanced tab does not use default options
* FIX: Plugin settings page is not accessible for excluded users
* TWEAK: Changed settings page to use admin-ajax.php instead of REST API
* TWEAK: Removed the usage tracking code (which was always explicit opt-in)