Our team confirmed today that WP-Optimize has passed the 600k install milestone.  This is the first major milestone since UpdraftPlus acquired the plugin from Ruhani Rabin at the end of 2016. 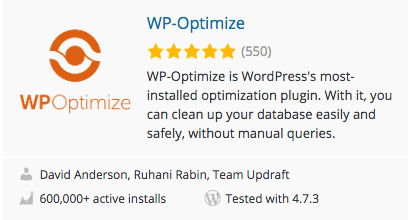 We’ve already released a lot of internal improvements and bug fixes in the last few months.  We’ve also been busy preparing a number of new Premium features, such as multisite support, the ability to optimise individual tables as well as InnoDB – these should be released in the coming weeks.

In the long term, we’re looking at optimising images and all aspects of a website – not just the database.

We’re thoroughly enjoying the challenge and a big thank you to all our users!

If you’re an UpdraftPlus customer who’s not yet using WP-Optimize – please do download and check it out today.  It’s a great piece of software: https://wordpress.org/plugins/wp-optimize/

UpdraftPlus confirms it has acquired WP-Optimize

UpdraftPlus, the world’s most popular backup plugin, has today confirmed it has acquired WP-Optimize, a plugin for cleaning up WordPress databases.

The takeover will bring together a user base of well over 1 million WordPress sites, making it one of the largest WordPress companies in Europe, something that excites both David Anderson, founder and lead developer of UpdraftPlus, and Ruhani Rabin who created WP-Optimize.

The acquisition underlines UpdraftPlus’s strategy to build an ecosystem of backend plugins that can be managed by their remote control product called UpdraftCentral to rival ManageWP, WPRemote and Calypso.

WP-Optimize is a popular and highly-rated free plugin that runs automatic clean-ups on WordPress databases so that they run at maximum efficiency without the need for manual requests.

It was founded 8 years ago out of Rabin’s desire to simplify the process of WordPress optimization. From experience, he understood the importance of removing redundant data in order to keep databases clean and efficient. He also found this process tedious, time-consuming and technical, and so he developed a plugin that would make things simple, quick and automated. And so WP-Optimize was born.

Although initially developed for personal use, Rabin quickly recognised its wider potential and made WP-Optimize available as a free download: “It ended up being a much bigger project that I imagined; when I connected with other people, I was suddenly opened up to a world of new challenges. I was encouraged to constantly improve the software’s functionality and compatibility, as well as the support information available.”

WP-Optimize worked well; users rated it highly, and its popularity spread. Today, it’s used on over half a million websites, something Rabin finds “inspiring, thrilling and at the same time, terrifying.” Rabin felt a huge responsibility not just to maintain the plugin and deliver a high level of support, but also to keep up the creative innovation. It was too much for just one man, and a lack of time and resources meant Rabin was unable to carry out his many ambitions for WP-Optimize’s expansion.

David Anderson was once in the same position. UpdraftPlus’ popularity took him by surprise, and he built a team around him out of the realisation that it would require more than ‘curiosity and a hobbyist’s obsession’ to drive the plugin forward.  Since then it has become the most installed British WordPress plugin.  He feels this same team could also benefit WP-Optimize, speeding up its pace of development and giving it a ‘new breathe of life’.

UpdraftPlus wasn’t the first to show interest in acquisition; over the years, Rabin had received offers from various companies and individuals. However, selling to them didn’t feel right: “For me, WP-Optimize’s legacy was of prime importance. I didn’t set it up to make money, but to help out as many people as possible.” With UpdraftPlus, Rabin felt differently. He had known UpdraftPlus from the beginning, and he admired and the fact that, “even though they are business-driven, they still have a great freemium ecosystem.”

UpdraftPlus had just what Rabin was looking for: “a group of people who were enthusiastic and driven to take on this product and evolve it to the next level.” Rabin trusted that WP-Optimize would be a perfect fit within the Updraft Plus family of products.

From Anderson’s perspective, acquiring this ‘solid back-end plugin’ makes perfect sense, as it gives UpdraftPlus users an easy, trusted option for optimization, which is as vital as backing up. Anderson says, “Although we see a lot of revolution on the outside, the WordPress core has been stable for a long time, and as such, there will always be a need for database optimization in order for sites to run efficiently.”

UpdraftPlus has just released a new version of WP-Optimize, which has already had ‘a complete re-factoring of the plugin’s internals, to lay a solid foundation for future improvements.’ Although it looks the same outwardly, it’s been modernised and solidified, although this is only the beginning. Anderson is excited by the opportunities to further develop WPO so that it makes websites ‘even leaner and faster’. In addition, he wants to add full multisite support, a premium version with additional features, and the capacity for users to control it remotely through UpdraftCentral. Rabin will remain involved, taking on an advisory role in this development.

The UpdraftPlus team is thrilled to have WP-Optimize on board- and it doesn’t rule out further acquisitions in the future. Anderson says, “we have a great and growing team, a lot of experience in the internals of WordPress and also a lot of users who trust and depend on us. There’s plenty of opportunity for us to expand.”

The post UpdraftPlus confirms it has acquired WP-Optimize appeared first on UpdraftPlus. UpdraftPlus – Backup, restore and migration plugin for WordPress.

A new release of WP-Optimize, our WordPress login plugin, is out. This adds support for WordPress sites with non-default permalink setups, a configuration that was not ready for our initial release: but now is!

Users will also want to make sure that they have updated their WP-Optimize iOS or Android app to the current version – this is also required for these sites.

UpdraftCentral, our dashboard for managing multiple WordPress sites from a single dashboard, in both self-hosted and SaaS versions, has had a new release.

This new release adds a new feature requested by users – the ability to sort the displayed order of your sites. This is done by a simple drag-and-drop.

Last time also saw the release of a very useful “mass updates” feature. This release now sees a number of fixes to various corner-cases based on feedback, making this very useful feature much more robust.

A number of other small tweaks and fixes have been applied. The update is now live on our hosted version, and for self-hosted users should be available in your WordPress dashboard “updates” page.

Not yet tried out UpdraftCentral? You can start instantly on our hosted version, here.

And in case you’ve not yet seen WP-Optimize, our newest product for easier and more secure WordPress logins: go here to see what you’re missing (but note that if you’re on iOS and your WP website is behind an extra layer of HTTP password protection or has non-default permalinks, then we don’t expect Apple to have approved the new app release that supports those cases for another 24 hours or so from when this blog is posted! For Android, that’s already live).

The full UpdraftCentral changelog since the last release is as follows:

If you use Google Chrome as your browser, then you probably don’t know what version you’ve got installed – Chrome automatically updates itself, and doesn’t make a fuss about it. And that’s fine – we’ve all got better things to do than keep track of arbitrary numbers.

But – the current Chrome update (Chrome 45) has a bug that breaks the WordPress admin area.

This post on WPTavern has a description of how to work-around it. It’s a Chrome issue, so you can avoid it by changing the setting in Chrome, or switching to another browser, until a future Chrome release hopefully fixes it.